The Battle for Athens: Strategy and Tactics

The Battle for Athens: Strategy and Tactics
by ANDRE GEROLYMATOS 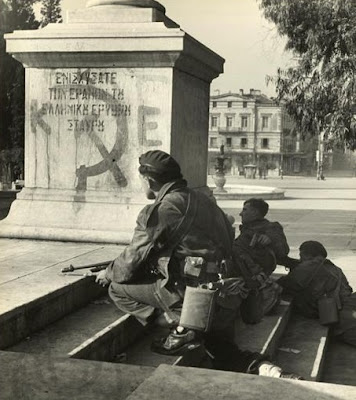 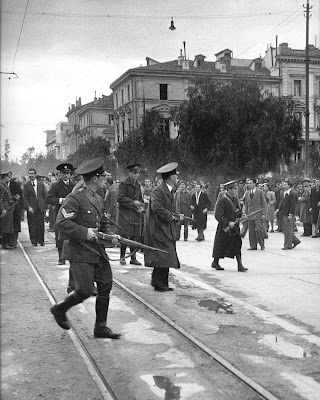 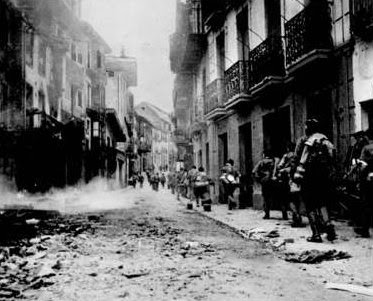 These structural and organizational changes implemented by Siantos took place between the end of November and the beginning of December. A close examination of Siantos's activities indicates that he was determined to control events by himself, and for that purpose he divided the political leadership of the KKE and the Central Committe of EAM from ELAS. Furthermore, he separated ELAS proper from the reserve units that constituted the 1st Army Corps in Athens and the force that would conduct the main part of the battle. It is evident from the memoirs of Spiros Kotsakis, the commander of the 1st Army Corps, that this unit was separate and distinct from ELAS proper. The commander and all officers were members of the Communist Party and had direct responsibility for the Athens region 28.
There is no documentation to shed any light on why Siantos took this course of action, leaving only the speculation that he wanted to be solely in charge of the subsequent political and military direction of EAM-ELAS and the KKE. If that is the case, then Siantos was preparing for an urban guerrilla war and the 1st ELAS Army Corps would be the ideal weapon in the forthcoming battle. This may explain why Siantos diverted three ELAS divisions to attack Zervas and the failure to commit the main ELAS forces in the battle for Athens. It may also shed some light on the controversial meeting of the ELAS kapetanios at Lamia 29. Both Vasilis Bartziotas and Yiannis Ioannidis claim in their versions of the Lamia gathering of kapetanios that Siantos distrusted Aris Velouchiotis and suspected him of instigating provocations 30. Accordingly, it is no coincidence that both Velouchiotis and Saraphes were ordered by Siantos to command the ELAS forces sent against Zervas in Epirus, and thus neither were able to take part in the events in Athens. Were these actions by Siantos a sign of his mistrust and displeasure of Velouchiotis as well as of Saraphes, or did they simply reflect Siantos's strategy ? Certainly Siantos could have relieved both men of their positions or, at the very least, taken from their command a significant number of ELAS units that could have played a decisive role in the battle for Athens.
Colonel Christopher M. Woodhouse writes that the activities of ELAS indicated that the preparations that took place in late November were essentially defensive. He underlines his point by stating that there was considerable confusion at the ELAS General Headquarters and that no attempts were made to prevent officers and men of the gendarmerie passing through territory controlled by ELAS on their way to Athens 31. What he fails to notice, however, is the buildup of the 1st ELAS Army Corps and the possibility that Siantos planned to use that unit to seize control of Athens. If that were the case, it explains why Siantos paid little attention to the deployment of the rest of ELAS and his initial reluctance to allow these forces to attack the British 32. Siantos on 2 December still referred to the British as "our Allies" and as late as 17 December, according to Nikolaos Zachariades's accusations in 1950, committed the blunder of allowing a British regiment to enter Athens unopposed 33.
These accusations against Siantos are valid if it is assumed that the Greek communists were planning an all-out military campaign in order to seize the government. In that case, the primary target was the British forces. As previously mentioned, the Government of National Unity, without the British, had only few forces at its disposal. However, it is evident that Siantos was also aware that the Papandreou government had limited freedom of political or military maneuvering and that all major decisions required the tacit approval of the British authorities in Athens and London 34. Even on the issue of demobilization, which precipitated the crisis, it was Genera Scobie who, practically ignoring Papandreou and his ministers, issued the order for all resistance forces to disband 35. Siantos was under no illusion that the British represented the real power in Athens but had to exercise their authority through the internationally recognized Greek Government of National Unity 36. The Secretary of the KKE also understood, and as events later in the battle con- firmed, that it was beyond ELAS's resources to wage war against the British armed forces but could bring down the Papandreou government. Under these circumstances it is quite conceivable that Siantos believed that the 1st ELAS Army Corps was sufficient to seize Athens within a few days and present the British with a fait accompli.
On the other hand, such a strategy may explain the tactics employed by the Greek communists during the battle of Athens. After the incident on 3 December, the ELAS forces proceeded to attack police stations on 4 and 5 December and government buildings on 7 December. Woodhouse characterizes the actions of ELAS as "slow to escalate." 37. In one aspect this is true, in the case of confrontation with the British, but it is self-evident that ELAS moved quickly against the institutions that represented the Greek government. Scobie on his part was equally reluctant to move against ELAS, despite a strong directive from Churchill urging him to maintain order and to neutralize or destroy all EAM-ELAS bands. More precisely, Churchill informed Scobie to "... act as if you were in a conquered city where a local rebellion is in progress." 38. ELAS continued to concentrate on Greek government targets, including the Rimini Brigade as well as on the X (Chi) organization and against the Averoff prison, which held a number of collaborators awaiting trial. Although there were sporadic clashes between British patrols and ELAS units while the RAF began to strafe ELAS forces and positions,39 it was not until 7 December that Siantos gave permission for ELAS to at least retaliate against British forces that intervened in the fighting in Athens 40. However, the ELAS Central Committee maintained its directive prohibiting ELAS forces from initiating attacks against the British, and only after 11 December was the ELAS 1st Army Corps given orders to engage the British units—but only in the capital. 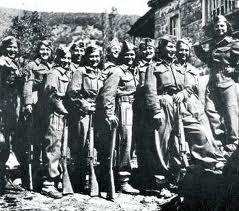